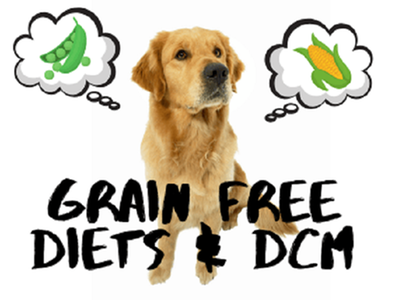 From the American Kennel Club (AKC):

"The FDA is investigating a potential dietary link between canine dilated cardiomyopathy (DCM) and dogs eating certain grain-free dog foods. The foods of concern are those containing legumes such as peas or lentils, other legume seeds, or potatoes listed as primary ingredients. The FDA began investigating this matter after it received reports of DCM in dogs that had been eating these diets for a period of months to years. DCM itself is not considered rare in dogs, but these reports are unusual because the disease occurred in breeds of dogs not typically prone to the disease."

What is Canine Heart Disease or Dilated Cardiomyopathy (DCM)?

In the FDA's July 2019 update on diet and canine heart disease, they examined labels of dog food products reported in DCM cases to determine whether the foods were "grain-free" (defined as no corn, soy, wheat, rice, barley or other grains), and whether the foods contained peas, lentils, chickpeas, beans, or potatoes (including sweet potatoes). Their report states that more than 90 percent of foods reported in DCM cases were grain-free, 93 percent of reported foods contained peas and/or lentils, and 42 percent contained potatoes/sweet potatoes.

According to Dr. Klein, "At this time, there is no proof that these ingredients are the cause of DCM in a broader range of dogs, but dog owners should be aware of this alert from the FDA. The FDA continues to work with veterinary cardiologists and veterinary nutritionists to better understand the effect, if any, of grain-free diets on dogs."

The FDA's July 2019 update includes the names of dog food brands that were named 10 times or more in reports submitted through April 30, 2019. Most reports were for dry dog food, but raw, semi-moist and wet foods were all represented.

Taste of the Wild (53 reports)

Until more research is done, we do not recommend a grain-free diet for your dog. For more information, you can read the rest of the article here.